A perennial plant, asparagus grows back every year without the need for replanting. Did you know that harvesting asparagus is quite the laborious process?

Once the plant is mature, it will sprout several spears every day during harvest season, reaching their full height in about 24 hours. If the asparagus isn’t harvested within that time frame, it will grow into an inedible fern. So farmers have to harvest every day and cut each spear by hand.

That’s certainly enough to give a person appreciation for the expensive asparagus at the market.

Here’s your guide to the health benefits and nutrition of asparagus, as well as how to use it in your kitchen.

Garden asparagus (Asparagus officinalis) is an herbaceous perennial plant that is a member of the lily family. When you eat asparagus, you’re actually eating the young shoots of the plant. If they’re left to grow, those asparagus spears become giant feathery fern-like plants.

There are hundreds of varieties of asparagus, though only about 20 of them are edible. Many are purely ornamental and some are even toxic.

The most common variety of asparagus is the standard green kind you see in most grocery stores. Other varieties range in color from purple to white, and range in size from small to massive. Wild asparagus has thinner stalks than the ones you’ll find in the grocery store.

White asparagus is actually the same plant as the green plant, but the white variety grows without sunshine. Asparagus turns green when it’s exposed to sunlight, so the white variety needs to be covered during growth and placed in dark boxes as soon as it’s harvested. If it gets sunlight during growth, it will turn pink!

We have records of asparagus growing in ancient Greece and Rome. Egyptians may have cultivated asparagus for medicinal reasons over 2,000 years ago.

The ancient Greeks and Romans used a Persian word "asparag" which meant shoot.

Where is asparagus grown?

California produces most of the crop for the United States, with Washington state and Michigan coming in at a close second. China and Peru are the largest producers of asparagus internationally.

It takes three years, from the sowing of the seed to the harvest of the first stalks. Asparagus is one of the few vegetables that is grown as a perennial and, if well cared for, can produce shoots for up to 12-15 years.

When is asparagus season?

These green stalks are one of the first things to pop out of the ground after winter’s long hibernation and become available in early spring.

Asparagus is harvested from late February through June, depending on the region, with April being the prime month and high point for asparagus season, and May marking the end of its season in most locations.

International harvest makes asparagus available almost year-round, but many find imported asparagus to be rather bland.

Asparagus thrives in temperate climates where the ground freezes, and the spring thaw and warming temperatures prompt the spears to emerge from the ground.

They are harvested once they reach 6-8 inches tall, with the thickest spears being about a half-inch thick. They start out thin, and get thicker as the season progresses, then taper off again; most harvest stops when the spears grow only to the thickness of a pencil.

Asparagus should be bright green in color, sturdy and firm, avoid any limp spears. The asparagus tips should be tightly closed and compact - similar to an artist's paint brush - and not starting to spread out or sprout. Make sure the tips are not soft and mushy.

Many stores sell asparagus standing in water or ones that have a damp cloth under them - this is to keep the stems moist. You will want to find a bunch that has moist - as opposed to dry and flaky - stems.

Asparagus comes in four sizes: small, standard, large and jumbo. And contrary to popular belief, tenderness is related to how the plant is grown and how soon it‘s eaten after harvest rather than spear size.

All the sizes can be tasty as long as they’re cooked properly, though it’s best to choose stalks of uniform thickness so they cook evenly - thin stems will cook faster than thick stems.

The best way to store asparagus is like that of flowers or herbs.

Before placing in the refrigerator, trim a half-inch from the ends of the asparagus. Stand the asparagus up in a glass or jar with about an inch or two of water, making sure all the ends are sitting in the water, then store in the fridge. If the water looks cloudy, simply change it as needed.

Many recommend covering the bunch in a plastic bag, but you can also use a silicone bag or leave it without the bag. Just be sure to use them within a couple of days or they’ll start to go limp.

You want the bottom of the stem to be moist, with the rest of the asparagus remaining dry. Don’t wash or soak your asparagus in advance, as this will cause the veggie to spoil quickly.

Alternatively, instead of storing in water, you can also wrap the fresh-cut ends with a wet paper towel and store in the vegetable drawer of the refrigerator. Keep in mind that using this method they won’t last as long, and will lose their flavor more quickly.

The biggest thing to remember is that the sooner you eat it, the more flavor it will have. Asparagus loses its flavor as it sits.

You can also blanch (boil/steam and transfer to an ice bath) and freeze asparagus or can it - though canning will result in mushy, albeit tasty spears.

Asparagus is a great source of fiber and vitamins K and B9 (folate). Like many other vegetables, it contains high amounts of antioxidants including vitamin E, C and many polyphenols and flavonoids (plant compounds that can combat the negative effects of oxidative stress).

There are many benefits to eating asparagus including decreased levels of blood pressure and blood sugar, as well as protecting against neural tube defects during fetal development - likely due to its high folate content.

You may notice that eating asparagus makes your urine smell rather pungent. This is perfectly normal and harmless, it’s simply caused by sulfurous compounds in the vegetable.

How to Prepare asparagus

Despite being known as a luxury vegetable, asparagus is one of the easiest veggies to prepare and cook.

First wash the bunch with water. Then you’ll need to remove the woody ends of your asparagus. You can cut them, but I find it easiest to just snap them off where they break naturally.

From there, you can eat them raw or cut and cook them.

How to use asparagus

The taste of asparagus will vary with the season and variety. Generally, it offers an earthy flavor similar to broccoli, almost like an intensely flavored green bean.

Thicker asparagus is traditionally left whole. Try them steamed with butter or hollandaise sauce, or blanched and chilled with a vinaigrette.

Early season asparagus is the most tender and fresh, requiring little effort to make it taste delicious. Simply steaming and topping with a little salt, pepper and a squeeze of lemon will do the trick.

It’s quite the versatile vegetable and can be cooked and served on its own or as a side dish. Asparagus can be grilled, steamed, roasted, boiled, blanched, added to pasta, salads, soups, and stir-fries. You can also shave it into a salad and eat it raw.

Tender, thin asparagus ends can often be left on and eaten along with the rest of the asparagus. You really only need to break off the ends of the really woody stalks.

If you do remove them:

Asparagus is one of the few perennial vegetable crops, meaning it comes back year after year. It’s so long-lasting that it can continue producing pounds of succulent spears for 15 to 20 years or more.

Apparently everyone creates “asparagus pee”, but not everyone can smell it. The sulfurous compounds in asparagus pee are what give off the distinct aroma, but some people have a condition called “specific anosmia,” which is the genetic inability to smell certain odors.

Interested in more superfoods? Check out all of our Superfood Spotlights! 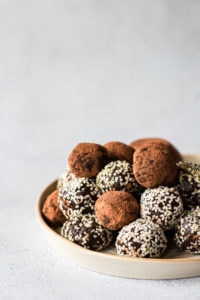